Project:Why are some of Wittgenstein’s texts missing from this website?

Project page Discussion
(Redirected from Why are some of Wittgenstein’s texts missing from this website?)

Why are some of Wittgenstein’s texts missing from this website?

This essay in a nutshell: Most of Wittgenstein’s works we are used to referring to by a book title were published posthumously, in some cases with little intervention by his literary executors, in some other cases after undergoing extensive editing. This poses a copyright problem, because the editor’s work might add a further “layer” of intellectual property protection. The Ludwig Wittgenstein Project is determined to treat copyright issues with the greatest care and will only publish texts that are in the public domain beyond a reasonable doubt. This article should be considered a Ludwig Wittgenstein Project policy statement as of January 2023. For more general information about the Ludwig Wittgenstein Project and copyright, see the Copyright section of the About page.

Wittgenstein wrote a lot but published little. A very short, and hilarious, review of Peter Coffey’s The Science of Logic. The Tractatus Logico-Philosophicus. A dictionary, or rather a spelling book, for German-speaking schoolchildren. An academic article by the title Some Remarks on Logical Form. A letter to the editor of Mind.

Almost everything we now have in book form—in such a way that we can step into a shop and say “I’m looking for a copy of…”—was published posthumously. After Wittgenstein died in 1951, his appointed literary executors, G.E.M. Anscombe, R. Rhees, and G.H. von Wright, were left with the task of sorting and grouping his handwritten notes and typescripts in order to publish them.[1] 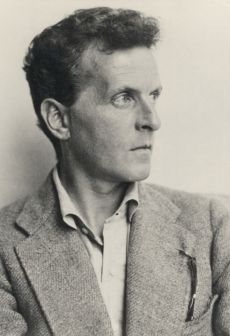 Now, the Nachlass itself—the collection of Wittgenstein’s manuscript material, the “raw” Wittgenstein—has been available online since the 2010s, almost in its entirety, both in a fac-simile edition and in an XML/HTML transcription. This was made possible by the generosity of the copyright holders of the originals, The Master and Fellows of Trinity College, Cambridge, and the work of the Wittgenstein Archives Bergen. Much of the digitised content has been released under the Creative Commons Attribution-NonCommercial licence (CC BY-NC).[2]

The intellectual property rights on the Nachlass will expire in those countries where the copyright term is the life of the author plus 70 years on 1 January 2022. Everything in Wittgenstein’s own writing will then be in the public domain in such countries, the list of which includes Austria (where Wittgenstein was born), the United Kingdom (where Wittgenstein became a naturalised citizen), and Italy (where the Ludwig Wittgenstein Project is based and where its servers are located).

The copyright status of Wittgenstein’s posthumous works: what we are certain of

Some parts of the Nachlass were carefully prepared for publication by Wittgenstein himself, and it is fair to assume that he would have had them printed had he lived longer. The Philosophical Investigations, for which he even wrote a preface in 1945, are the best example of a text thoroughly crafted by Wittgenstein and ready for the press by the time he passed away. In other cases, however, his notes were only published as books after undergoing extensive editing.

The subject of this essay is precisely this latter group of books, and specifically the issue of the further “layer” of copyright which might exist not because of Wittgenstein’s intellectual work, but because of the editing process carried out by Anscombe, von Wright, Rhees and Wittgenstein’s other posthumous editors, who all died more recently and whose works will therefore be copyrighted for decades to come.

Copyright protects the output of all intellectual activity that has a creative nature, as opposed to the result of mere sweat-of-the-brow work. Of course, case law varies country by country, but there is a general, worldwide convergence toward the concept that a “threshold of originality” must be met in order for a work to be copyrighted. For example a verbatim transcription, just like the scan of a sheet of paper, does not generate new intellectual property rights, because it is purely mechanical in nature: if the transcribed text and the scanned picture are in the public domain, so are the transcription and the scan. A translation, on the other hand, requires an amount of thought and choice that makes it a creative work in its own right, so that even if the original-language edition of a book is out of copyright all new translations of that text are, by default, copyrighted. 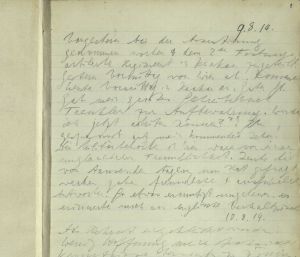 The first page of Wittgenstein's MS-101, featuring a handwritten note from 9 August 1914, as published on Wittgenstein Source under CC BY-NC 4.0.

Wittgenstein was certainly the sole author of the works he published during his lifetime, so that there is no doubt concerning their being out of copyright when the term after his life expires, regardless of whether this term is 50, 70 or 100 years depending on the country.

The situation becomes complicated, however, with reference to Wittgenstein’s posthumous works.

As we mentioned above, in some cases the publishing history of a book is very clear, and Wittgenstein is indeed the sole author of the Philosophical Investigations.

In other cases, books published under Wittgenstein’s name contain nothing that was in fact written by Wittgenstein: this is the case, for example, with the Lectures on the Freedom of Will and the Lectures and Conversations on Aesthetics, Psychology and Religious Belief,[3] that are collections of notes taken by his students. Here the situation is also clear: these will not be out of copyright until the term expires for those who took the notes. Even if the purpose of these scribes was probably to be as faithful as possible to Wittgenstein’s speech, that is to say they were actively trying to avoid being original, any rendering of a text that is not word-by-word does indeed generate a new layer of copyright.

Then there are midway cases, and it is with them, of course, that problems arise.

It is very difficult to navigate the intricacies of copyright law. Precedents help.

Anne Frank was murdered in Bergen-Belsen in 1945. Her diary was expected to enter the public domain in Holland, as well as in other countries with a 70-years copyright term, on 1 January 2016. In 2015, however, representatives of the Anne Frank Fonds, the foundation that inherited the rights to the diary after the death of Anne Frank’s father, Otto, released an announcement claiming that, because the diary was co-authored by Otto Frank himself, the text would only enter the public domain after the expiration of the 70-years term after his death, which occurred in 1980.[4] Otto Frank indeed played a meaningful role in preparing the original 1947 edition of the diary by collating and editing his daughter’s original handwritten notes. The claim that he was a “co-author”, however, was never made before 2015, and when it was made it was regarded by many as a move to ensure the foundation’s income for another generation at the expense of humanity’s right to freely access one of the most important books documenting the horrors of its recent history.

The issue doesn’t seem to have been addressed by a court. The diary was removed from Wikisource in February 2016 by the Wikimedia Foundation for reasons unrelated to authorship, and rather connected to “the overreach of the United States’ current copyright law”.[5] In Europe, former member of French parliament Isabelle Attard published the original Dutch edition on her own website accompanied by an explicit and passionate statement rejecting the “privatisation of knowledge” and defending the public domain;[6] the file was never taken down.

The copyright status of Wittgenstein’s posthumous works: what we are uncertain of

What Wittgenstein’s literary executors—or, more broadly, his editors—did in order to prepare the publication of such texts as On Certainty, the Remarks on Colour, Zettel, Philosophical Grammar, Culture and Value, and others, was a combination of selecting, grouping, and sorting. The rendering of individual sentences has always been word-by-word, except for trivial corrections of spelling and punctuation. Lacking an objective criterion, it is very difficult to determine the extent to which this kind of activity can be considered creative.

Based on our expertise in the field of copyright, we at the Ludwig Wittgenstein Project decided to only publish those texts for which we had strong reasons to determine that the editor’s work can not be considered creative. A case-by-case analysis is beyond the scope of this short essay, but it can be useful to provide an example. In the introduction to their edition of On Certainty, G.E.M. Anscombe and G.H. von Wright write: “What we publish here belongs to the last year and a half of Wittgenstein's life. […] It seemed appropriate to publish this work by itself. It is not a selection; Wittgenstein marked it off in his notebooks as a separate topic, which he apparently took up at four separate periods during this eighteen months. It constitutes a single sustained treatment of the topic.”[7] We consider this more than sufficient for determining the non-creative nature of Anscombe and von Wright’s work of collating the notes that make up the book.

In other cases, the editors’ work of selecting and organising Wittgenstein’s remarks was not aided by any suggestion of Wittgenstein’s own. For as difficult as it may be to draw any conclusions, we think that this might be enough for someone to make claims similar to the one the Anne Frank Fonds made in 2015. In such cases, we decided not to publish the texts until we achieve a greater degree of certainty on the matter.

Conclusion. The Ludwig Wittgenstein Project’s vision and its policy

All internet projects inspired by the principles of the Free Culture movement live in what seems to be a contradiction. 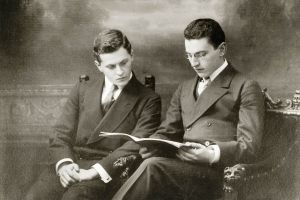 Ludwig and Paul Wittgenstein photographed by Carl Pietzner in 1909.

Our very existence is an objection against the status quo of intellectual property laws. Wikipedia, the Internet Archive, Project Gutenberg and all the others, including, small as it may be, the Ludwig Wittgenstein Project, are (among other things) living objections against the notion that copyright should benefit heirs for decades after the death of authors. We hope and we work for a world in which knowledge and culture can be freely accessible to all. And we want all to be aware that our world would be one step closer to that if copyright helped creators make a living out of their creations and then expired at the moment of their passing.

At the same time, our very existence depends on the most scrupulous respect of the same laws whose underlying logic we wish to challenge.

This is probably not quite as contradictory as it may seem, but it is important to understand that the fact that we comply with certain rules does not mean we endorse them.