Ludwig Josef Johann Wittgenstein (Vienna, 26 April 1889 – Cambridge, 29 April 1951) was an Austrian-born philosopher who mostly worked and taught at the University of Cambridge. He is widely considered one of the most important philosophers of the 20th century.

Born into a wealthy bourgeois family, the young Wittgenstein was acquainted with some of the most important figures of Viennese fin de siècle culture (Johannes Brahms, Gustav Klimt, Gustav Mahler, Karl Kraus). While completing his studies in mechanical engineering in Manchester, Wittgenstein developed a keen interest in logic and the philosophy of mathematics through the works of Gottlob Frege (1948–1925) and Bertrand Russell (1872–1970). He moved to Cambridge in 1911 to attend courses taught by Russell, who immediately noticed Wittgenstein's sharp perspicacity, as well as his troubled attitude.

Later, Wittgenstein spent some time (1913–1914) in Skjolden, Norway, where he wrote and dictated his first works on logic (the Notes on Logic and the Notes Dictated to G.E. Moore in Norway). At the outbreak of World War I, he enlisted as a volunteer in the Austrian army. The war was one of the most influential experiences of Wittgenstein’s life. Amid the harshness of the conflict, his first work – the Tractatus Logico-Philosophicus, completed during his imprisonment in Cassino (1918–1919) – came to light. The book was first published in 1921 as a German edition, of which the author disapproved, and later in 1922 as an English translation by Wittgenstein’s friend Frank Ramsey (1903–1930). The Tractatus was the only philosophy book that Wittgenstein published during his lifetime. 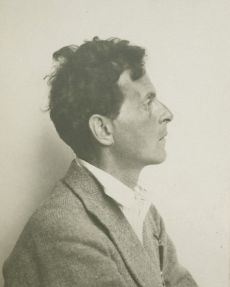 Turning away from philosophical thought, from 1922 to 1928 Wittgenstein devoted himself to teaching elementary school in a small Austrian village, to architecture – he built his sister Margarete’s house – and to working as a gardener in a convent. The newly-founded, neo-positivist Vienna Circle took an interest in his work, which elicited rather cold reactions on Wittgenstien's part.

In 1928, however, a conference held by mathematician Luitzen Brouwer (1881–1966) in Vienna reawakened Wittgenstein's interest in philosophy, convincing him to move back to Cambridge, where he obtained the teaching qualification. The years from 1928 to 1941 are remembered as a period in which the logical-philosophical theories of the Tractatus were thoroughly reconsidered: starting with the Lecture on Ethics (delivered in 1929), he revised and modified his ideas on language, logic, the foundations of mathematics, psychology, anthropology, and symbolic forms. The result of these reflections was collected in a series of manuscripts and typescripts written by Wittgenstein himself, or transcribed by his students during lectures. These include the Philosophical Remarks, Philosophical Grammar, the Big Typescript, the Blue Book and the Brown Book, and Zettel.

During World War II, Wittgenstein served in a civilian hospital. Between 1947 and 1950 he spent time in England, Ireland, and the USA. Between 1949 and 1951 he wrote the remarks that were later published as On Certainty. But his best known and most memorable, albeit unfinished work from this period remains the Philosophical Investigations, the masterpiece of the “later” Wittgenstein, which, ever since its publication in 1953, has been fertile ground for contemporary philosophy.

His most famous words: “Whereof one cannot speak, thereof one must be silent” (Tractatus logico-philosophicus, 7). His last words: “Tell them I’ve had a wonderful life”.

An outline of Wittgenstein’s thought

Wittgenstein’s philosophical works touched upon numerous critical points in contemporary philosophy. It is not incorrect to say that Wittgenstein’s major concern throughout his life was the investigation of language, but it would be reductive to limit the scope of his thought to the philosophy of language and logic. Wittgenstein was influenced by Hertz, Frege, and Russell, but also by Kraus, Spengler, Weininger, Schopenhauer, Tolstoy, and Kierkegaard. Nor were his influences limited to the philosophical sphere: Wittgenstein was an attentive reader of Goethe and an appreciator of German poetry. Music, moreover, and particularly the classical romantic music of the Liederists and Brahms, remained one of Wittgenstein's primary sources of inspiration.

The Trinity College in Cambridge, where Wittgenstein spent most of his time and taught lessons between 1929 and 1941.

At the time of the Tractatus's writing, the influence of the prevailing logicism framed Wittgenstein's consideration of symbolism in a representational and “realist” perspective, although he brought brilliant innovations to coeval philosophy. The key idea of this first book is the distinction between what can be said (or represented, i.e., the facts in the world) and what can only be shown (i.e., the forms of representation). The Tractatus aims to delimit the realm of meaningful propositions to the realm of science and to prove that ethics, aesthetics, and logic are alike in that they cannot be expressed by meaningful propositions. Wandering between the strictly logical and the mystical, Wittgenstein discusses topics that range from the picture-theory of proposition and logical atomism to truth-functionality, from the foundations of ontology and epistemology to the conception of the normativity of natural laws, from reflections on solipsism to ethics, aesthetics and theology. The logical Wittgenstein of the Tractatus particularly conditioned the emergence of the neo-positivist philosophy of the Vienna Circle, which was formed in the Austrian capital during the first post-war period and brought together thinkers such as Moritz Schlick (1882–1936), Rudolf Carnap (1891–1970), Otto Neurath (1882–1945) and Friedrich Waismann (1896–1959).

The period of the Philosophical Investigations coincides with an evolution in Wittgenstein’s consideration of language, which is now traced back to linguistic practices – the well-known “language games” – that reveal specific configurations of human behaviour – “forms of life”. These notions reveal an affinity with the “linguistic-pragmatic turn” in the philosophy of language, and are applied variously by the author in the philosophy of psychology, in anthropological reflections (see, for example, his Notes on Frazer’s “The Golden Bough”) and in his work on the foundations of mathematics.

The discontinuity between Wittgenstein's early thought and his mature reflections has often been emphasized – even by Wittgenstein himself, in some passages – especially with regards to the evolution of his conception of the nature of language: as formally structured in the “early” Wittgenstein, and as linked to the variable forms of culture in the “later” Wittgenstein. However, lines of continuity can be discerned, especially in the conception of philosophy as a “critique of language" and the “ethical point” of philosophical work, which is not intended to operate as a foundation nor give rise to a theory, but rather reflects the transformative force of the human being.

Wittgenstein wrote a lot but published little: a very short review of Peter Coffey’s The Science of Logic; the Tractatus Logico-Philosophicus; a dictionary, or rather a spelling book, for German-speaking schoolchildren; an academic article by the title Some Remarks on Logical Form; a letter to the editor of Mind. Almost everything we now have in volume format was published posthumously. After Wittgenstein died in 1951, his appointed literary executors, G.E.M. Anscombe, R. Rhees and G.H. von Wright, were left with the task of sorting and grouping his handwritten notes and typescripts in order to publish them.

Now, the Nachlass itself – the collection of Wittgenstein’s manuscript material, the “raw” Wittgenstein – has been available online since the 2010s, almost in its entirety, both in a fac-simile edition and in an XML/HTML transcription. This was made possible by the generosity of the copyright holders of the originals, The Master and Fellows of Trinity College, Cambridge, and the work of the Wittgenstein Archives Bergen. Much of the digitalized content has been released under the Creative Commons Attribution-NonCommercial license.

A scan of Ms-102,14v (diary entry dated 13 November 1914). The Master and Fellows of Trinity College, Cambridge, The University of Bergen, Bergen, CC BY-NC.

Some parts of the Nachlass were carefully prepared for publication by Wittgenstein himself, and it is fair to assume that he would have had them printed had he lived longer. The Philosophical Investigations, for which he even wrote a preface in 1945, are the best example of a text thoroughly crafted by Wittgenstein and ready for the press by the time he passed away. In other cases, however, his notes were only published as books after undergoing extensive editing: this is the case, for example, with the lectures he held in Cambridge and the private conversations, that we have received through notes taken by his students and interlocutors. There are midway cases as well, texts such as On Certainty, Remarks on Colours, Zettel, Philosophical Grammar, Culture and Value. In order to prepare these texts for publication the editors selected, grouped, and sorted the remarks.

Based on our expertise in the field of copyright, we at The Ludwig Wittgenstein Project decided to only publish those texts for which we had strong reasons to determine that the editors' work can not be considered creative. The list of available texts meeting these criteria is constantly being updated.

This paragraph lists Wittgenstein’s writings that are available on this website and provides a very short introduction to their editorial history and philosophical content.

Review of P. Coffey, The science of logic Expand

In 1913, Wittgenstein published a very short review of philosopher and mathematician Peter Coffey’s The science of logic in The Cambridge Review (vol. 34, no. 853, 6 Mar. 1913, p. 351) as part of his academic duties as a bachelor student. In an openly ironic tone, Wittgenstein argues against the antiquated views of the author and the inaccuracies of the logical notions he expresses, some of which – such as the subject-predicate form of the proposition, the relationship between thought and reality, and the logical-semantic function of the verb “to be” – will have an important development in Wittgenstein’s own works from the 1910s.

Go to Review of P. Coffey, The science of logic

According to Rush Rhees, in 1929 Wittgenstein’s disciple Maurice O’Connor Drury (1907-1976) procured and read to his mentor passages from the English anthropologist Sir James George Frazer’s (1854-1941) The Golden Bough: A Study in Magic and Religion (in the 12-volume edition of 1906-1915). A series of remarks in German were drawn by Wittgenstein from the reading in 1931; they were later revised and expanded, after 1936 and probably after 1948. Rhees edited the notes on Frazer for publication and they appeared in 1967 in the German journal Synthese. The published text brings together extracts of Wittgenstein’s Nachlass Ms-110, Ts-211 and Ms-143.

In his Remarks on Frazer’s “The Golden Bough”, Wittgenstein openly opposes the tendency in anthropology to rationalize apparently irrational practices and behaviours belonging to the sphere of magic and the sacred in non-western societies. To this type of reduction Wittgenstein opposes an account based on the cultural-relative validity of linguistic practices, significantly accusing Frazer of being “far more savage than most of his savages, for these savages will not be as far removed from an understanding of spiritual matters as an Englishman of the twentieth century”. The understanding of anthropological phenomena, Wittgenstein argues, must therefore be relative to the context in which they take place, and in which, for example, a sacrificial or ritual practice is not traceable to the modern scientific explanation, because it arises in an entirely different form of life. Such forms of life are manifest in the language games in which they are embodied, so that, quoting another famous statement from the book, “a whole mythology is deposited in our language”.

In bringing an explicit content to contemporary anthropology, Wittgenstein's philosophy thus takes on here some epistemological questions, which will be called up on several occasions in the Philosophical Investigations and in On Certainty.